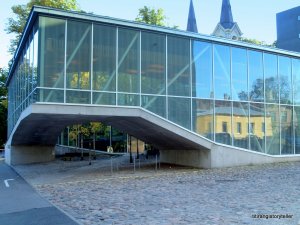 I have many stories to tell about visiting Estonia and while some include unexpected tears, most are very beautiful. This one is not. Visiting the Museum of the Occupation in Tallinn was chilling.

Not sure what took me so long to get to Tallinn. I had wanted to visit ever since I was a little girl and my grandmother told me stories about Estonia. She made it sound so magical, so different from the world I knew in the Bronx – and having finally made it there, I can declare unequivocally that Tallinn and the Bronx are as opposite as north and south 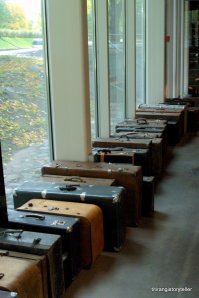 or cold and hot. The Bronx of my childhood was war-torn and terror ridden. The Tallinn I finally got to see was possibly even more idyllic than grandma had described.

The museum is set in a mostly residential neighbourhood near the old city – a modest glass building, reflecting its surrounds, with a very small sign indicating what it houses. Once inside I was immediately struck by the suitcases – hastily packed by people who knew they would probably never return, packed with the items they treasured most for a journey with no return ticket.

I stood there quietly, wondering if one of them had been my grandfather’s. Elmar Hiiesalu had hastily packed just such a bag when he was forced into the Soviet army, when the Russians finally overcame the Nazis. 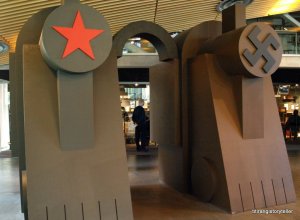 This archway threw me – I  couldn’t bring myself to walk underneath it. The power of the imagery was unexpectedly overwhelming. I walked around it instead.

Most of the exhibits were devoted to Estonia’s endless struggle to be  free. It has been alternately occupied by Danes, Germans, Russians and Swedes for most of the last millenia – the fate of a tiny country – with less than a million people. Ironically, the culture survived largely because the Estonian people were forced into serfdom and so preserved their language and customs. 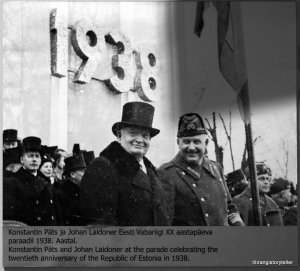 But in 1918, when Russia was busying herself with the Revolution – Estonia, along with neighbouring states, Latvia and Lithuania, declared itself a free, sovereign nation. Here is a photo of President Konstantin Pots at the 20th anniversary of the republic in 1938. Pots was my grandfather’s boss – he was his personal secretary. Grandpa didn’t make it into this photo, no doubt tending to some important detail.  Many of my relatives were involved in government work, including the then mayor of Tallinn. If they weren’t forced into the army or sent to Siberia, they went to prison. You went to prison for being the wife of a politician.

Which brings me to the truly chilling part of the visit. The doors. Click the thumbnails for a larger look.

These came from various prisons around Estonia where political prisoners were held, including members of my family. Something so very gruesome about these cheerfully painted doors – you would never find them on a movie set – only in real life. Just being near them, I could hear and feel the misery and sorrow they contained – I had the sensation of wanting to wash them. 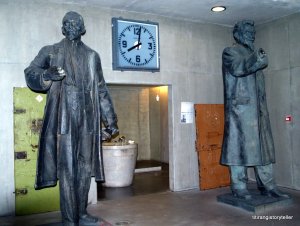 Things got a wee bit surreal, and slightly humourous when I asked where I might find the loo. Downstairs.

Yes, that is Lenin and Stalin, flanking the entrance to the toilets – women on the right, men on the left. A couple of spare prison doors behind them. If you look at the full-size photo, you will note the statues are damaged – this is from when they were toppled when Estonia declared its freedom again in 1991.

Various other disgraced Communists  – Russian and Estonian, were strewn about the basement floor, along with toppled monuments and Soviet era iconography. The hatred the Estonian people felt for their occupiers is palpable nearly twenty years after they were removed from power.

To be honest, the emotions were so raw, it was truly painful being there. After an hour and a bit, we really couldn’t take any more and decided to walk up to the upper city. This monument made me smile…

8 thoughts on “Museum of the Occupation – Tallinn”