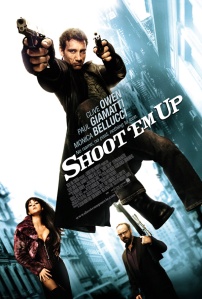 83 minutes long, at least 60 of which are non-stop action! This tongue in cheek actioner starring Clive Owen, Paul Giamatti and Monica Bellucci is an assault on the senses, fuelled by a heavy metal soundtrack featuring Motörhead, AC/DC, and Mötley Crüe and barely enough plot to fill a fifth formers book report.

Owen plays Mr Smith, innocently waiting for a bus on a dark, lonely street when a labouring woman runs past, chased by a gun-toting thug. Dumping his latte, Smith follows them into an abandoned warehouse and rescues the woman, slaying the small army that is determined to kill her. Shell casings drop on her belly as she gives birth to a son. Smith shoots through the umbilical cord, snatches up mother and child and scatter-shoots his way out of the building.

Unfortunately, mum takes a bullet in the head, leaving Smith with the newborn. Unfortunately, lead baddie Hertz (Giamatti) was wearing a bulletproof vest and rounds up a new army, which Smith dispatches as efficiently as the first.

For most actioners, this would be followed by at least ten or fifteen minutes of talk-fest back story. Shoot ‘Em Up is just getting started!

Baby is hungry. Smith heads to a brothel featuring a lactating prostitute, DQ (Bellucci). Servicing clients is one thing, but DQ declares nursing a baby is too kinky.

Hertz’s latest team of dead men walking convince her that Smith and bub are her best option and the mad-cap slaughter and mayhem continue as they discover why the baby loves heavy metal, who wants it dead and just how dirty American presidential politics can really get!

Try taking this surreal actioner seriously and it’s possibly the worst movie ever made – nothing but gratuitous sex and violence. But Owen, Giamatti and Bellucci are first-rate actors revelling in a bit of low-budget fun. If you don’t mind the body-count, crank up the volume and lose yourself in its absurdity. It’s a sheer delight.

Plenty of special features on the DVD, though I found I didn’t really want to dismantle the magic and find out how it was made. For those who do, there are interviews with the cast and crew, a look at the 200+ different kinds of guns used, an analysis of the endless stunts and commentary from the director.