By the end of his life, Marlon Brando was often portrayed as a buffoon, a colossal wreck of a man, whose personal tragedies dominated his life; irrelevant to moviegoers three generations removed from his tormented, “Stella! Hey Stellaaaaa!” Yet Brando’s sweaty muscle-bound Stanley Kowalski in A Streetcar Named Desire set a new standard of performance, conveying a natural savage energy that transcended the Hayes Code censorship still firmly in place in 1951. Without Brando, there would not have been Pacino, no de Niro or Leonardo diCaprio or Johnny Depp. Equally important, without Marlon Brando, there may not have been an Elvis Presley, Mick Jagger or DMX.

While Brando’s contribution to acting is undeniable and universally recognised, his contribution to the birth of rock’n’roll is often overlooked. The actor made a single singing and dancing turn in 1955’s Guys and Dolls where he proved once and for all that he could neither sing nor dance.

But Marlon Brando stirred up the primordial stew of unrest and youthful angst of the pre rock’n’roll 1950’s, straddling his own Triumph as Johnny Strabler, the leader of the Black Rebel Motorcycle Club (B.R.M.C) that terrorises the small American Midwestern town of Wrightsville in The Wild One in 1953. Unable to control the situation when a rival gang, headed by Lee Marvin (on a Harley) arrives and violence erupts, the exasperated sheriff pleads with Johnny, asking, “What are you rebelling against?” “Whaddya got?” was the response. The film was considered so potentially corrupting and inappropriate for a youth audience, that it was banned in Britain until 1968 and never shown in many American towns for fear of corrupting their fragile youth. Though the dangerousness of the gangs seems rather tame by contemporary standards, Brando’s depiction of Johnny remains on of the finest film performances of all-time. 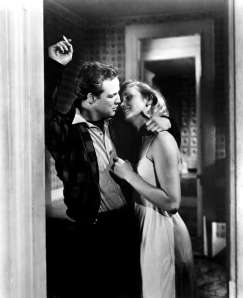 While it would be a couple more years until Bill Haley and the Comets rocked around the clock in their pastel braided suits ushering in the rock’n’roll era, Brando along with James Dean in Rebel Without a Cause, inspired the far more dangerous and sexual ‘angry young man’ persona that would later define the attitude of rock’n’roll.

In 1954’s On the Waterfront, for which he earned his first Best Actor Oscar, Brando cemented this image as Terry Malloy, destroyed by corruption all around him, including the brother who raised him. Turning his back on his brother after he has Terry set up a friend to be murdered, he uttered the legendary, “I coulda been a contenduh!” which resonates in Eddie Cochran’s Summertime Blues and Elvis Presley’s Heartbreak Hotel. 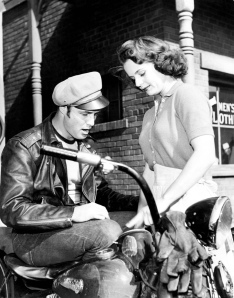 Presley, Cochran, and Gene Vincent were insolent, rebellious, pissed off, and much to parents’ horror, were going to fuck your daughter – and she wanted them to, not unlike the innocent sheriff’s daughter Kathie Bleeker (Mary Murphy), in The Wild One, who finds herself falling in love with Johnny and says, “I wish you were going somewhere. I want to go somewhere. We could go together.”

Though his early films inspired a revolution that reverberated throughout the industry, as Brando moved into his thirties, he seemed a man divided. There was the man immersed in stardom, with his personal life an endless source of tabloid fodder and his choice of films seemingly based more on financing his excessive lifestyle (including the purchase of a string of Tahitian islands) than furthering his art. Then there was the passionate crusader, marching with Martin Luther King jun on Washington in1963, fighting for civil rights.

Though his box office appeal remained strong through the 60s, he made a string of mainstream films hardly worth revisiting, culminating in his only directorial effort, One Eyed Jacks, which was never released. Always plagued with weight problems, he was no longer the virile, muscle-bound youth, and moved into middle age as a sagging, dissolute has-been. The world thought it had seen the last of Marlon Brando.

Then in 1972, he returned triumphant as Don Vito Corleone in Francis Ford Coppola’s The Godfather. Aged and with his cheeks stuffed with tissue paper, Brando was at his peak as the all-powerful don, ruling the New York Mafia with an iron fist, invoked after he had ‘made an offer he couldn’t refuse’ to the offender. In one of the

most controversial moments in Oscar history, he refused to accept the Best Actor statuette in protest of the treatment of Native Americans and sent the part-Apache Sacheen Littlefeather in his place to publicly refuse the award. John Wayne, standing backstage, was reportedly so enraged; he had to be restrained by a half dozen men as he tried to rush the podium to remove her.

Brando followed up with the X-rated Last Tango in Paris (1972), once again shocking audiences with the same raw emotion and primitive energy of his early films, as a recently widowed American in Paris who gets caught up in a sadomasochistic love affair.

While he continued to accept mainstream roles based on the size of the pay packet (most notoriously receiving the unheard of sum of US$4 million for little more than a cameo appearance as Jor-El in Superman (1978), he once again stunned the film world as the psychotic Colonel Walter Kurtz in Apocalypse Now in 1979. His portrayal of a renegade megalomaniac ‘ruling’ his personal kingdom in the jungle, so far out control the army has determined the only way to handle him is to kill him “with extreme prejudice,” in some ways, seemed to echo the actor’s own life. Making this film was so emotionally taxing for the ageing star he vowed never to undertake such a demanding role again.

While none of his later films proved earth shattering, The Freshman (1990) with Matthew Broderick and Don Juan de Marco with Johnny Depp (1995) are both worth revisiting, the former where he takes the piss out of his Godfather character, and the latter, one of my personal favourites, where Brandon proved that at the age of 71 and carrying 150 kg he could still play a romantic lead to a still lovely Faye Dunaway.

The eighty year old actor, thrice married and father to at least eleven children, passed away alone in an LA hospital on 30 June 2004. An actor until the end, he had at least two film projects in the works including Brando on Brando, a feature film about an Arab boy in search of the star. He was frail in his final weeks and French director Ridha Behi was uncertain that Brando, who was on a respirator, would be able to complete the film. “He looked at me,” said Behi, “and pulled the mask off and said, ‘I am ready. You just say ‘action.’”

6 thoughts on “Marlon Brando: More than a contender”