I fell in love with The Beatles back in 1962, when I was 6 years old. The radio was full of “Love Me Do” and “Please Please Me” and “From Me to You” and “She Loves You” and “I Want to Hold Your Hand” (along with “The Twist” and “The Loco-Motion” and “Johnny Angel.”) I discovered my life-long love of music that year and never let it go. 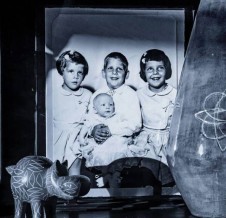 But while I adored the Supremes and The Shirelles and the Everly Brothers no one came close to the Beatles, especially Paul McCartney, who in my eyes, was the dreamiest guy in the world. Living in the Bronx, I was down at the candy store on the corner nearly every single day – no longer buying candy – I bought every single fan magazine and pored over every photo and wished and hoped I could marry Paul one day. And when The Beatles actually came to New York in the winter of 1964, I begged and pleaded with my mother to take me to the concert. She refused (and I never really held it against her) but agreed to give me a Beatle hair cut! That’s me on the right – looking just a tiny bit like Paul…

Years passed, life happens. The Beatles split up before I was even old enough to see them. Paul married Linda (a photographer!) and she was the love of his life, so that was that. I married someone else. Had some children, a couple of careers – the usual thing. I did get to see him in Cleveland in 1990, which was a thrill.

But it really can’t compare to his Auckland show this past weekend. He played a 3-hour show, 40 songs, to a packed out stadium of 48,000 people… And I knew all the words to all but about 4 songs. Amazing light show, including monster fireworks and Paul sounded just as good as he did 55 years ago – and my heart was singing all night long. He may be 75, but he still set my heart a-flutter.

And the best thing? I got to photograph the first two songs of the show for The 13th Floor. There’s a full gallery of my photos, along with a great review of the show here: https://www.13thfloor.co.nz/paul-mccartney-mt-smart-stadium-december-16-2017/ A night I’ll never forget.

3 thoughts on “Paul McCartney, at last…”