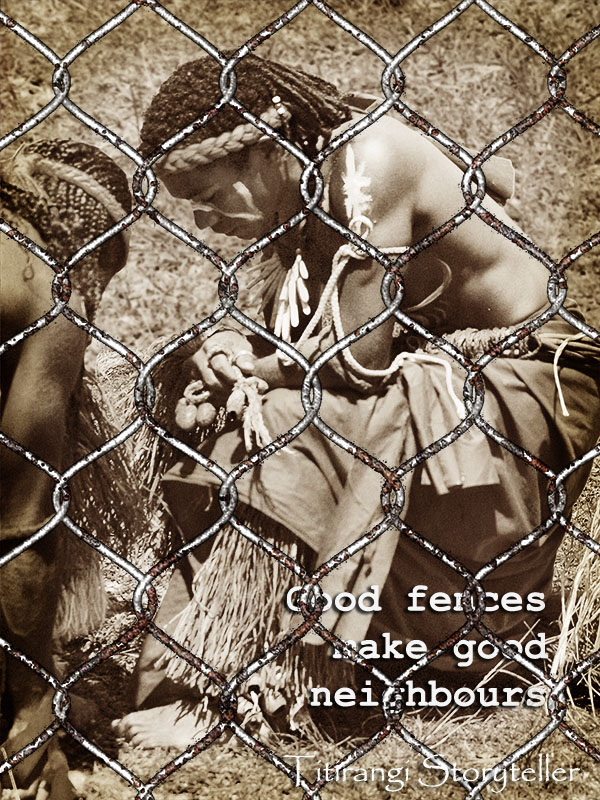 This image has a couple of inspirations – Happy Daze commented on my post the other day that good fences make good neighbours. Which got me thinking about good fences and good neighbours… I took this photo on a trip to the south Pacific islands late last year – it was taken in Lifou, which is part of the Loyalty Islands, New Caledonia and is owned by France. Though not taken on the same trip, I had a similar sort of reaction as I did to the land divers on Pentecost Island in Vanuatu a couple of years prior – feeling suddenly demoted from traveller/visitor to gawking tourist.

It was a scorching hot day, and there the dancers were, performing under the blinding, blazing sun. Except for a few who were deliberately working the audience, they didn’t make eye contact, didn’t connect with us. The photos were terrible – glare, high contrast, no real depth… Not that the show was unpleasant to watch, it just felt like a performance not connected to anything. After, we went for a wander through the village and surrounds, moving very slowly in the monstrous heat.

We came upon this dancer again, still in costume, animatedly talking on his cellphone. (And why shouldn’t he? I had my cellphone with me…) THAT would have been the photo to take, but it would also have been completely inappropriate, so I refrained.

I hate the phrase ‘developing country’ especially since it is often applied to cultures older than our own. 3rd world is right out. Even more, I hate the idea that any culture would be considered developing as they move away from their traditions to adopting western ways. But… the idea of ‘protecting’ them from outside interference is paternalistic, rather insulting. Seems to me this is a good case for good fences. Hopefully built cooperatively.

Oh, and the other inspiration for this photo came from a blast from the past that zoomed my way this week – from back in the Dorloo days. Her family lived down the road from mine. She also grew up to be a photographer and artist and has taken some wonderful shots of native American dancers. (http://www.thejenniferjeffers.com/powwow-photography.html)

They sparked me to think about my images, which I never did anything with because technically, they were a bit crap… but technique is only part of the story – sometimes a very small part of the story. And I like this photo because it reminds me of this young man, and how he has feet in two worlds…