Un Chien Andalou put both Salvador Dali and Luis Buñuel on the map with its opening scene of a young woman passively submitting as her eyeball is sliced open with a razor. An eye-opener even today, in 1929 it was positively shocking – resulting in the movie running in theatres for nearly a year.

One can only imagine what audiences made of the ‘story’ that follows, a surrealistic dreamscape of murder, mishap, severed limbs and ants. Buñuel appears as the eyeball slicer and Dali as a priest dragged across the floor ahead of two pianos weighted with rotting, dead donkeys. Considering its popularity, one can only assume audiences were far more sophisticated than they are today. We demand logical story arcs that rise and fall, resulting in a satisfactory ending. This little flick makes me want to pick up a camera and make a film of my own and is a must-see for anyone with those aspirations. 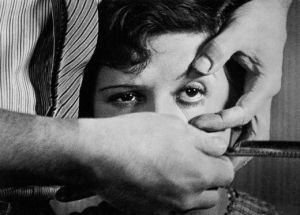 Look for the two-disc DVD release. Also included on disc one – a 1986 British doco on the life and work of Salvador Dali, which serves as a fine introduction for those unfamiliar with the surrealist master – whose life mirrored his art – right until the end. We could however, have lived without the Alka Seltzer ads.

The second disc features Buñuel’s only documentary, Las Hurdes (1933) the story of a remote Spanish village where he first examines the corruption of the Catholic Church, a theme he continued to explore throughout his career.  Also included is a doco from 2000 spanning his tumultuous career.

Between his early years as a surrealist filmmaker and his triumphant late-life career that began with Viridiana in 1961, Luis Buñuel made a dozen or so small-budget movies that were largely ignored by critics and audiences alike. Some were dreadful – a 1953 version of Wuthering Heights, where the producer insisted he use a cast comprised mostly of stock car drivers who had been prepped for a comedy. However, The Young One is the best of the lot and might be considered an overlooked masterpiece. Released in 1960, the year before Viridiana, it sits on the cusp of greatness – but you have to get your head around Buñuel working with an American cast in the deep South.

Bernie Hamilton plays Traver, a northern Black man on the run after a white woman accused him of rape. He escapes on a small boat and ends up on a game preserve island, managed by Mr Miller (Zachary Scott). Miller is dealing with the death of his handyman – and wondering what to do with the deceased’s granddaughter, Evvie (Key Meersman.) At first he considers packing her off to the mainland – but suddenly notices she is not the child he had thought. Indeed, with her pouty lips, long legs and casually swaying hips she is very appealing. 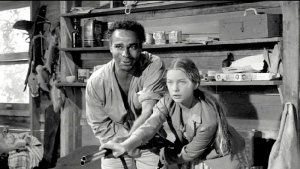 Hugo Butler’s brilliant and subtle script slowly intertwines Miller and Traver’s paths – shifting the balance of power as it is revealed that Traver is in fact innocent of rape and Miller, despite soothing his conscience trying to convince himself the illiterate Evvie is little more than a savage – guilty. It would sit well alongside the brilliant Tennessee Williams movies of the 50s and 60s. No special features on the disc, but the package comes with a sixteen page booklet containing a brilliant analysis of the film.

As good as The Young One was, it gave no indication of what was to follow. Viridiana took the  Palme d’Or at Cannes in 1961 and was promptly banned by both the Spanish government (who had financed the film) and the Vatican for its devious exploration of evil and, well, more evil.

Viridiana (Silvia Pinal) is a beautiful young nun who hasn’t taken her final vows who visits her uncle and benefactor, the wealthy Don Jaime (Francisco Rabal). Struck by Viridiana’s resemblance to her late aunt, who died before consummating their marriage, Jaime becomes obsessed and ultimately drugs and rapes her.

Viridiana decides she can never return to the convent and opts to stay in the house with Jaime and save the world on her own, starting with the local beggars and homeless. She soon discovers that she cannot change what these people really are and is livid when they ultimately turn on her. Buñuel’s genius is in the exposition of Viridiana – she is not the pious young woman she at first appears, but an arrogant sycophant who ultimately has earned her downfall.

Buñuel followed this with seven masterpieces, including That Obscure Object of Desire and The Discreet Charm of the Bourgiousie. I’m waiting for them to arrive as a box set sometime soon…

One thought on “Three from Luis Buñuel”