Too often we overlook our local Roadside Attractions – leaving them to the tourists, school groups and… in this case our local Photographic Society to organise an expedition. For years I’ve been meaning to ride the Watercare Rainforest Express through the Waitakeres. It departs virtually on my doorstep, from Scenic Drive in Titirangi but year in and year out, we haven’t gotten to it – until today. 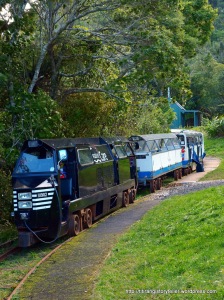 No matter, soon we were lined up, given the safety lecture – keep those heads and limbs in the train and no throwing rubbish off the train. Yip, yip – got that. There was a bit about controlling children, but we didn’t bring any, so no worries there.

The Rainforest Express is a narrow gauge rail, built to help construct the Upper Nihotupu Dam, which forms the Upper Nihotupu REservoir which provides 6% of Auckland’s water. This water, propelled by gravity, flows down an iron pipeline that runs alongside the train. Built in the early 20th century, the train is still used to maintain the dam and the pipeline. It’s been making Sunday excursions with passengers since the 80’s.

The day dawned a typical winter day in the Waitakeres – blustery, cold-ish, bits of clearing, occasional sun, occasional downpour – dress for everything and hope for the best. I wore lots of layers. 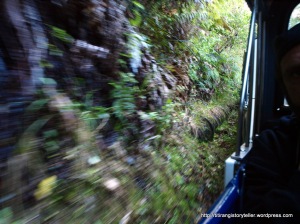 We settled into our seats, discovering our knees were in a jumble and needed to be freed – a bigger task than you would have expected, but soon, we were on our way, with the train chugging up hill, something slower than it’s maximum 17 kpm. Still, it was a bit of a blur.

We were straight into a 400 metre long tunnel. There were ten of them on the trip – all carved at at the turn of the century – with pick and ax – no drilling equipment. They are quite small, room for the train and the pipe carrying that 6% of Auckland’s water and not much more.

Soon we were in the midst of the densest bush you could imagine. At times, most of the time even, it is very dark, little light manages to penetrate the canopy of manukas, kanukas, rimu and young kauris’. But from time to time there is a break, and you can feel the intensity with which things grow and rot and overgrow in the bush. It is always cool or cold there.

Every year foolish trampers are caught unaware and unprepared. One of those things that baffles me – the bush does not feign benign-ness.

The vast majority of kauri trees were cut down between the mid 1800’s and early 1900’s. There are few giants left, and it is such a delight to see young ‘mature’ trees breaking free of the canopy. These were too young for those loggers to bother with, finally coming into their own.

Kauris can reach heights of 50 metres diameters of 5 metres or more – and live for over 1000 years. While there are numerous varieties of the species, the “Kauri” only grows in the northern part of the north island in New Zealand. These days they are very protected. There’s one growing perilously close to my house… I’m hoping it gives me a little space for a few more years. I am sure it will be there centuries after I am gone.

We continued through the bush until we arrived at Quinn’s Viaduct. This was quite impressive – 18 metres above the rushing stream. It’s only rushing this time of year. In the summer, there might be a slow gurgle, or nothing at all.

I was completely fascinated by the network of ladders and walkways that seemed to vanish into the bush.

The path along the track was littered by history – a coal bin – though no coal was ever taken out of the Waitakeres, replacement parts from the odd ‘explosion’ of the waterline – and the exploded bits.

There were also numerous train tracks that disappeared into the bush, some still in use, others left to decay.

We reached a clearing, filled with construction gear and a few picnic tables. 700 metres up a rocky road, was the Upper Nihotupu Dam.

The spill was breathtaking! And only happens during winter. In the summer there is so little rain, the reservoir levels drop – but today, it was full to overflowing.

Invigorating – the wind was fierce – and a little bit scary as you walked along the dam. 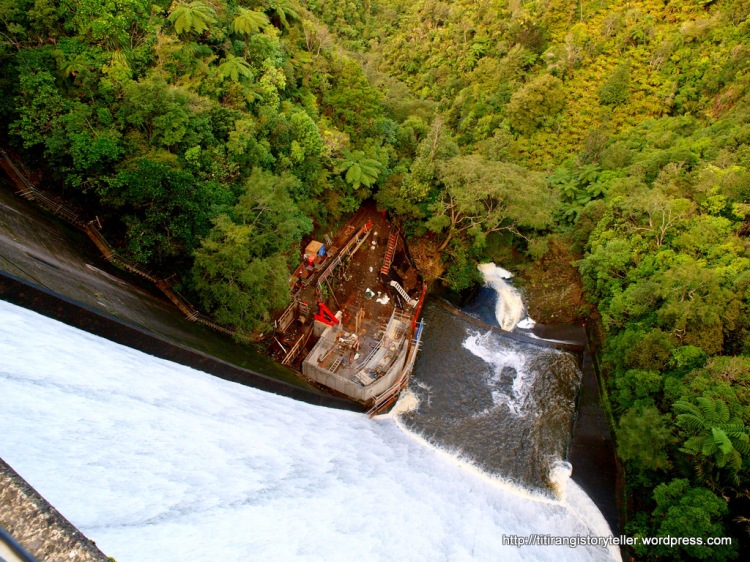 I wished I had enough time to climb down and explore the waterfall below. 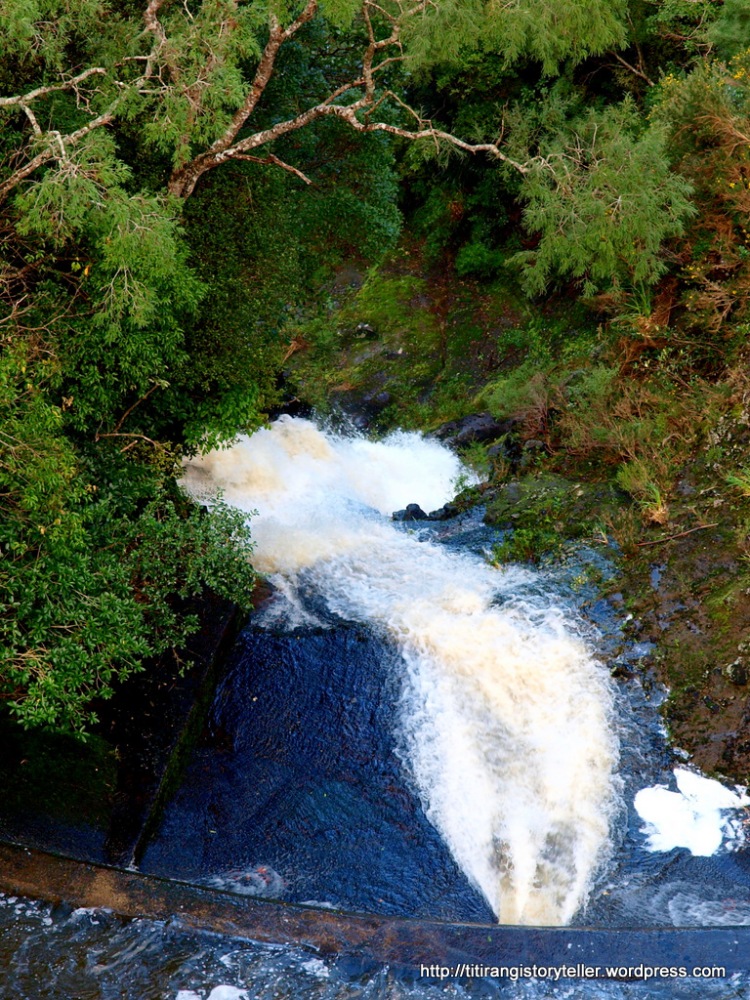 Whilst on the other side of the dam, the reservoir is a whole different world.

But soon it was time to go. The sun sets early in the winter – and the last shot of the day was from inside the little train – a lonely ponga against a deepening sky. 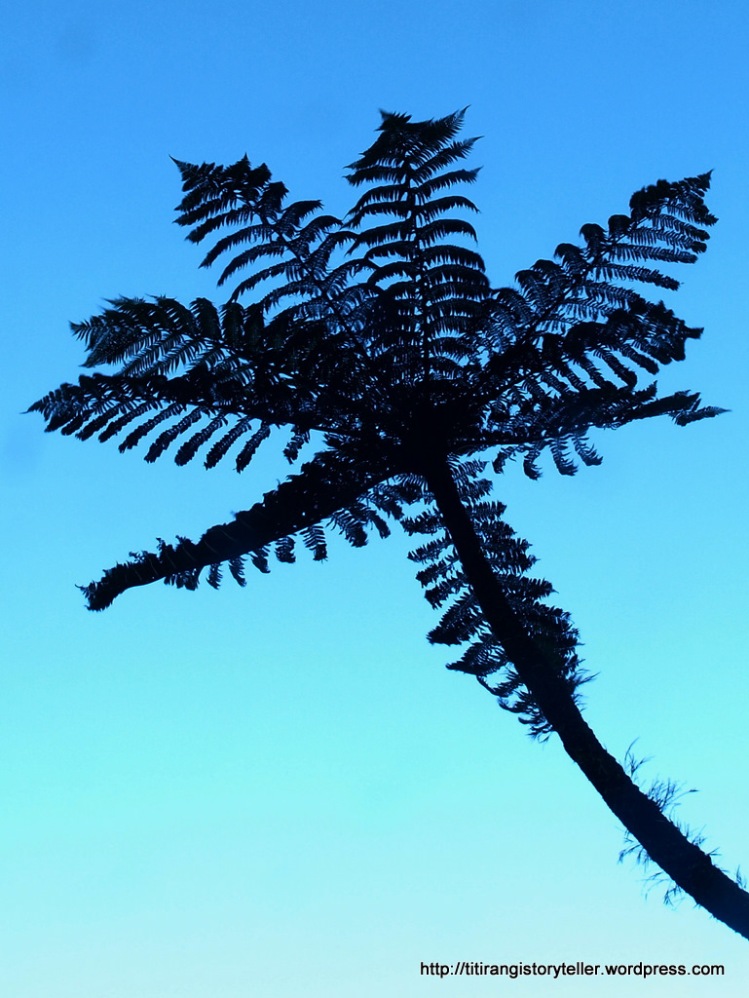 For more information on the Waitakere Rainforest Express, or if you think you might give it a go yourself, click here, for the Watercare website on the train trip, where you can find booking information.