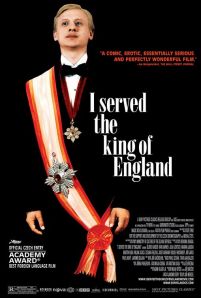 This dazzler from the Czech Republic coyly weaves a subtle dash of magic realism into the life of an ordinary little man, a Prague waiter who dreams of becoming a millionaire. We meet Jan Díte (Ivan Barnev and Oldrich Kaiser) as he exits a Czech prison sometime in the 60s, grateful for the amnesty that has given him three months off his fifteen-year sentence. Relinquished to a collapsing old pub deep in the forest, he commences the DIY project of a lifetime and takes stock of his life.

His first job was selling sausages at the Prague train station, a lucrative enterprise, where he discovered that no matter how wealthy and distinguished

people are, they’re always willing to get down on their hands and knees to pick up coins – a running gag, where he amuses himself by watching his betters crawl. From there it’s a pub and then a restaurant where he rises to headwaiter, deferring to the maitre d’ who has ‘served the king of England.’

When the 30’s bring the Nazis, Jan is torn between his love for the tiny German soldier, Líza (Julia Jentsch) and his country’s hatred for everything German. 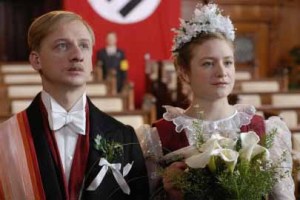 After having his sperm approved, he marries her and moves on to a posh hotel, which the Nazis have converted to a motherhood clinic, where Aryan blondes romp naked, waiting to be impregnated by German soldiers and he continues to serve.

Jan and Liza have a plan for after the war – stamps she has pilfered from the homes of deported Jews, which will make them rich.

(When he asks where they were deported to, she merely shrugs, an alarmingly simple gesture of indifference that speaks volumes.) But his good luck always has an underside and things never turn out as expected.

There is a surreal sensibility that occasionally surfaces when Europe examines its recent history, a sense of helplessness and disbelief at the reality of what has happened, recently seen in Guillermo del Toro’s Pan’s Labyrinth (2006). Oscar winning director Jirí Menzel (Closely Watched Trains, 1966) lures us into a slapstick comedy with profoundly deeper implications, you’ll be thinking about it for weeks.