Sophisticated and stylish, Mike Hodges’ (Get Carter) Croupier is a contemporary film noir masterpiece; its star, Clive Owen, an embodiment of Humphrey Bogart’s detached cool not seen since Annette Benning’s performance in the Grifters.  If you see only one indy film this year – make it Croupier.

Clive Owen is Jack Manfred – an aspiring writer who can’t seem to find the book he wants to write.

His publisher friend tells him to write a soccer novel, a guaranteed winner, but he can’t bring himself to do it.  Though is loving girlfriend Marion (Gina McKee) is willing to support him, he is weary of living hand to mouth – and so when his gambler Dad (Nicholas Ball) gets him a job as a croupier in a slightly sleazy London casino, he takes the job. 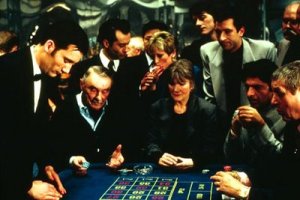 Though clearly a renegade, Jack is a straight-arrow when it comes to his work, to the point of turning in co-workers who cheat – and we slowly come to realise that he’s had a bit of a gambling problem in the past.  He relishes his position of control  and derives enormous pleasure from watching other people lose. 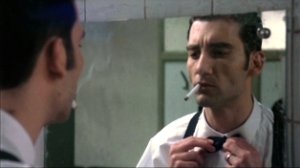 He finally gets to work on his novel – about a croupier named Jake – and slowly his life and that of his character become intertwined.  Jack takes up with Jani (Alex Kingston) a casino regular whose gotten in too deep and her creditors are threatening her life.  The people close to Jack begin to lose – their jobs, their lives – but he coldly analyses the situation, his inner dialogue an ongoing voiceover throughout the flick – and continues.

Then Jani asks him to help her with a planned heist of the casino – he calculates his odds of getting caught and consents, throwing his life and his fictional character’s into an unstoppable spiral of events drawing to a very unexpected conclusion.

Clive Owen is perfectly cast as Jack, quirkily handsome in his croupier’s tux, he gives Cary Grant and the 60’s Sean Connery a run for their money.  But it’s his ability to physically project his inner dialogue that drives the flick.  Alex Kingston is exquisitely beautiful and utterly confounding as the deceitful Jani.  Paul Mayersburg’s script is sparsely written putting great demands on the actors and allowing Hodges the room to create an artificial world where even the betrayers are betrayed.

I’ve noticed this turning up as a late night flick lately – if you can stomach the ads, it does seem the perfect way to watch it.