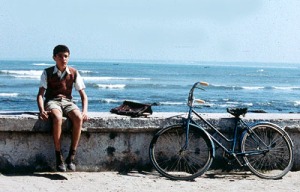 ppe Sulfaro) got his first bicycle and fell in love with Malena Scordia (Monica Bellucci), a 27-year-old war bride whose husband joined the fight in Africa.  There is not a man in the sleepy Sicilian village who does not drool over the exquisite Malena when she walks into town from her beachfront home.  The men drool, and the women seethe.  Though Renato’s friends lust for Malena, he believes himself to be in love with her, an obsession that leads to stalking, spying, and the theft of a pair of black lace knickers, much to his family’s comic horror. 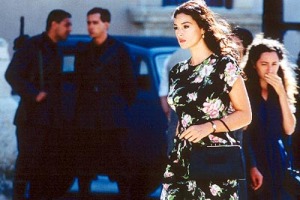 Director/writer Giuseppe Tornatore, who struck gold with Cinema Paradiso, once again presents us with the Sicily of his childhood, a story told through the eyes of adolescent male fantasy.  And such fantasy it is!  While this flick has been strongly criticised for excessive sexuality – my guess is that it comes a quite close to the reality of adolescent male desire.

We watch Malena’s life unfold as she loses her husband in the war, can’t find work (no man will hire her for fear of his wife’s rage), and when it looks like she will lose her home and starve to death – sells the one thing that men will always pay for.  Yet, we never get to know her.  Indeed, the only time we see her smile is when she is entertaining Nazi soldiers.  She is ultimately a tragic figure, desired and despised, cast aside because of her beauty.

Malena is a visually beautiful film, sensuous, sensitive, vulgar and tender at the same time – the sort of film that leaves you rapt from the opening scene to the closing credits.  Its unusually frank treatment of adolescent male sexuality and the price some women pay for theirs makes it a much better teen sex film than anything Hollywood has on offer.  Highly recommended.

One thought on “Malena”