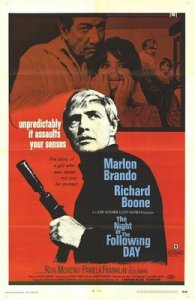 When one thinks of Marlon Brando, either his early works, A Streetcar Named Desire (1951), The Wild One (1953) and On the Waterfront (1954); or his later films, The Godfather (1972), Last Tango in Paris (also 1972) or Apocalypse Now (1979) come to mind. The actor made a total of forty films in his tumultuous career, and from the mid-60’s up to The Godfather, they included ten box-office failures, including The Night of the Following Day from 1968.

Brando considered the director Hubert Cornfield incompetent and throughout filming rewrote the script, refused to do certain scenes and often turned up drunk – insisting by the end of shooting that co-star Richard Boone take over directorial responsibilities. The end result is deeply flawed, but the incredibly performances make it worth a view for serious film lovers. Indeed the 44 year old Brando is so fit and beautiful, that alone makes it worth a view! 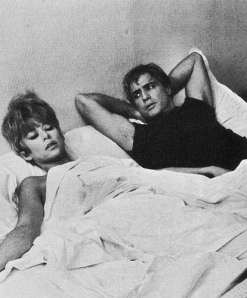 The film opens as a teenage heiress (Pamela Franklin) disembarks her flight to Paris. She is greeted by a chauffeur (Brando) who escorts her to a waiting limousine. Once they have left the airport, he stops the limo and the thuggish Leer (Boone) jumps in and she realises she has been kidnapped. They switch cars – the driver is now Vi, one of the stewardesses from her flight, played by Rita Moreno. They arrive at a remote seaside cottage, where Boone informs the girl they are professional criminals and as long as she cooperates nothing bad will happen to her. From there, everything goes pear-shaped. Brando and Moreno are long-time lovers, but she is back on heroin and no longer reliable. Boone is

lusting after their prey, while Moreno’s luckless brother (Jess Hahn) tries to keep the plot together. Doom wafts through every frame as the foursome get caught up in cross and double-cross and the girl is rightfully terrified of Boone. Watch it once to let the story unfold – watch it a second time with commentary from the director who remained bitter until his death over Brando’s appalling behaviour.

One thought on “The Night of the Following Day”